A version of this interview appeared in the Winter 2016 issue of Interviewing the Caribbean (IC). IC features works by Caribbean artists at home and in the Diaspora. If you would like to read my poems, Wounds and Leaving, please purchase a copy of the journal here.

IC: Both “Wounds” and “Leaving” deal with an all too common, but ignored issue of child abuse—emotional, physical and sexual—in the Caribbean. The poems raise goosebumps. Growing up in Jamaica, did you witness/hear about such incidents? Why have you chosen to explore these issues in poetic form?

Juleus Ghunta: While growing up in rural Jamaica, the days when I didn’t see children being abused were rare. Child abuse, which is a cultural norm, is often punitive, in some instances it’s a rite of passage or an outlet for stress relief. A few years ago UNESCO reported that more than 90% of Jamaica’s 2–14–year olds experience abuse. Yet many Jamaicans do not know what child abuse is or worse the link between adverse childhood experiences (ACE) and developmental delays, post–traumatic stress disorder (PTSD), chronic health problems and violence. We ignore this issue at our peril.

When I started writing poems a few years ago, I was experiencing severe post–traumatic stress and needed to deflate. I tried several genres, poetry came most naturally to me.

IC: In “Wounds,” the child has no refuge, all the adults, including his guardian, are merciless. Dare readers speculate about what might be the fate of such a child? Did you have a specific incident or child in mind?

JG: A single parent, my mother, sold snacks at my primary school. Giving teachers permission to beat me was one of the ways she endeared herself to them. At home, she beat me with switches, wires, brooms, anything within arm’s reach. When I was twelve, my father threatened to kill me if I failed to repay his one–off investment in my education. My mother compared me to him. At fourteen, I moved into my tenth home and lived alone for three years. Fortunately, I got help but many of my peers who faced similar challenges did not. Some are dead.

Now that I know more about trauma and the cyclical nature of violence, I’m able to commiserate with my mother. She endured much cruelty and indignity in order to give us a shot at a better life. In 2015, I read an editorial in The Guardian newspaper and was struck by this pertinent question: “Where to begin in measuring the effect on the child–rearing of parents denied any childhood themselves?”

IC: “Leaving” dramatises the voicelessness of children, how they are silenced by fear, so the truth remains hidden. These poems are emotional turmoil that could be sequences of poems that trace the life-pattern of these children. Where is the alternative for children—victims or survivors—who are reading your poems? Do you see this as your role, to offer solutions/provide alternatives?

JG: Jamaica should create trauma centres, similar to Nadine Burke Harris’ Centre for Youth Wellness. Child protection organisations like the Centre for Investigation of Sexual Offences and Child Abuse (CISOCA) and the Child Development Agency (CDA) do not have the resources needed to effectively manage the complaints they receive. They need trained counsellors who understand psychopathology and the neurobiology of trauma. The traditional moral and legal approach is ill–advised. Perhaps poetry can help victims, but only widespread civic engagement, socio–economic empowerment and re–education will create the change we need.

Severe trauma is incurable. There are graveyards in us. Writer Toni Morrison refers to this as ‘a little thread of poison’. Thankfully, people can survive and succeed. My poetry is more of an act of survival than a medium for advocacy. I hope to publish a collection in a few years, I’d be happy if it makes a difference in someone’s life.

IC: Many are lamenting the decline of Caribbean society, and citing the present day gun/drug violence, do you think this current phenomenon had its root in historical antecedents?

JG: In The Aesthetics of Decolonisation, novelist George Lamming said that it’s necessary to reconcile the past with each moment of conscious living. The Caribbean was shaped by extreme violence, but violence is only one star in the constellation of challenges we’ve faced. Were T. A. Marryshow alive, he would have blamed the failure of federalism for the ‘decline’. It’s unclear to me what we mean when we use the word ‘decline’ in broad reference to the region’s degeneracy. For example, Jamaica’s economy grew steadily in the ’60s, but only a few people had access to secondary education. The economy hasn’t grown in decades, but in 2015, nearly 100% of primary school leavers enrolled in secondary schools. So when we speak of the ‘decline of Caribbean society’ we need to be more nuanced.

IC: As a peace advocate what are some tangible ways concerned and thoughtful persons can help children when they witness this sort of abuse? Often the attitude is to not get involved, partly from fear of retaliation, but also not being sure reporting is going to do any good. What are your thoughts on this dilemma?

JG: Years ago, my mentor gave me a copy of Kahlil Gibran’s book The Prophet. After reading the chapter on children, the view that responsible adults are not duty–bound to safeguard all children seemed absurd to me. It takes a village to abuse a child. If we do not shield children from harm, what morality can we claim? Voltaire said that every man is guilty of the all the good he did not do. The decision should always be to get involved. In Jamaica, if you fear retaliation, you can make anonymous calls to the Office of the Children’s Registry (OCR) and the police.

When I was a teenager, I was so desperate for paternal affection that I tried to make fathers out of strange men. John O’Donohue said that one of the deepest longings of the human spirit is to be seen. Who desires to be seen more than the abused, neglected child? Tens of thousands of these children live in Jamaica. Reach out to them. 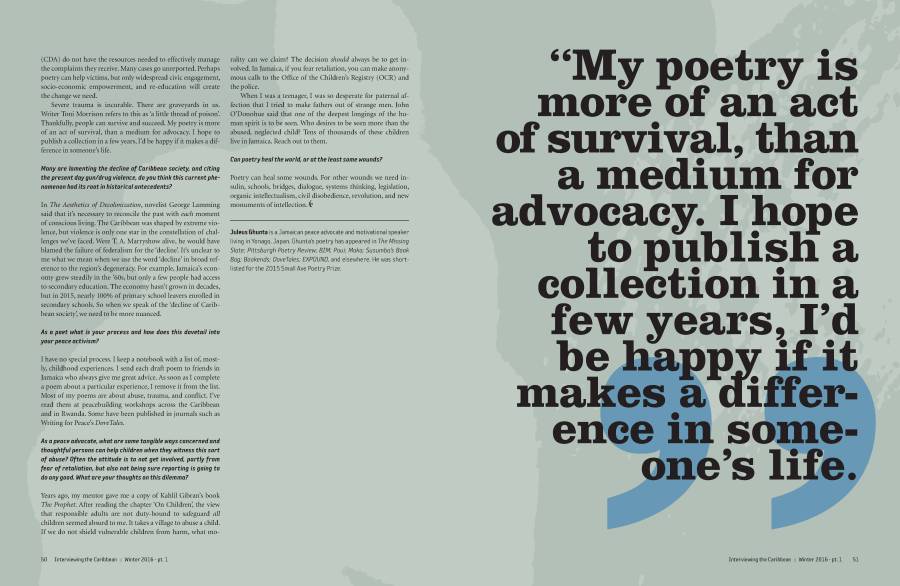